The exhibition presents a selection of cameraless and experimental photographs by Tibor Várnagy (Budapest, 1957).

Várnagy, as a representative of “alternative” endeavours, has been a determining figure in the Hungarian art scene of recent decades. He is a founding member of the Hejettes Szomlyazók, one of the most important artists’ groups of the 1980s (he participated in the group until 1990); besides photography, he draws, occasionally paints and makes collages, objects and installations. From 1991 to 1994, he worked together with Ágnes Eperjesi, and then he organised occasional exhibitions with Gyula Várnai, Zoltán Ádám, Dezső Tandori and Andrea Hajagos. Between 2001 and 2004, he edited the (quasi) periodical Manapság with Miklós Erhardt. He has been running a photo blog since 2006 and a video blog since 2009. Besides his creative work, he is also active as an art writer and gallery director & curator, and also as director of the Liget Gallery, which has been running exhibition programmes focusing on traditionally experimental genres (performance, experimental photography, intermedial endeavours) since its foundation in 1983. Besides experimental genres, his work occasionally also includes socially engaged activist projects.

Since the mid-1980s, Várnagy’s works have been regularly exhibited in Hungary and internationally (including the Mała Gallery in Warsaw and the Fotogalerie in Vienna, as well as at several exhibitions in the US), making him one of the most original representatives of creative/experimental photography. Várnagy’s photographic works, with their numerous references from Robert Heinecken’s videograms to Miklós Erdély’s photographic experiments, are closely linked to trends in performative genres, action art, but also new wave visuality and expressive gesture painting.

The title Photoessential? refers to the specificity of the series presented at the exhibition: the works that explore and build on the basic properties of light-sensitive materials bear the essential, elemental characteristics of the creation of the photographic image. This is reflected not only in the displayed photographic works but also in the exhibited cinematographic material, including the documentation of the 1990 action Photococktail, which ironically and provocatively questioned the rationale behind traditional expectations towards photography.

The largest group of exhibited works are the TV Contacts, created between 1985 and 1987 by directly making negative copies of images broadcast through the television screen. His first luminograms were made on docubrom paper, and later the artist also used black and white and colour photographic paper to create them, occasionally ‛reversing’ the original images into positive ones. Among the specific brûlage images that evoke the surrealist working method there are the Fire Contacts (1987), in which the light source illuminating the photographic paper is not external, but flames directly created by lighting the photographic paper illuminate the photosensitive surface and create the image, while also partially destroying the substrate. The artist used the empty frame of the enlarger and the expressive power of denseness caused by the strong light effect to create his series of luminograms, Black Squares (1988), which echo Malevich’s Black Square. The exhibition also displays chemical photographs – chemograms – such as the photographic tableau Budapest 02 (1986) or the series Portraits and Group Portraits (1990), which places the questions of the relationship between language and image in a sensual yet ironic post-conceptual framework, also including the carving that is the starting point of the series, work entitled I by Balázs Fekete, who worked together with Várnagy in the Hejettes Szomlyazók group. The exhibition also includes works from 1989, created by transilluminating everyday, almost banal materials (sugar, eggs) and various bodily fluids (urine, saliva, semen), as well as Polaroid photograms of the artist from the early 1990s, which are based on the experiences resulting from the Black Squares. The two parts of the Self-Portraits, which constitute the starting point of the works created in the spirit of the new wave aesthetic, by painting over photographs printed on canvas (with which Várnagy was accepted into the Studio of Young Artists in 1985), were created by re-painting with tempera under illumination, which links them to a process characteristic of Várnagy’s graphic work. The exhibition’s moving image material includes a montage of archival footage presenting the events of 1989, determining for the artist, a video presenting a graphic series closely linked to the photographic experiments, and a recent interview, which can be also be regarded as a “guide” to the exhibition.

The event is part of the VISOR Photo Festival of Szeklerland program series. 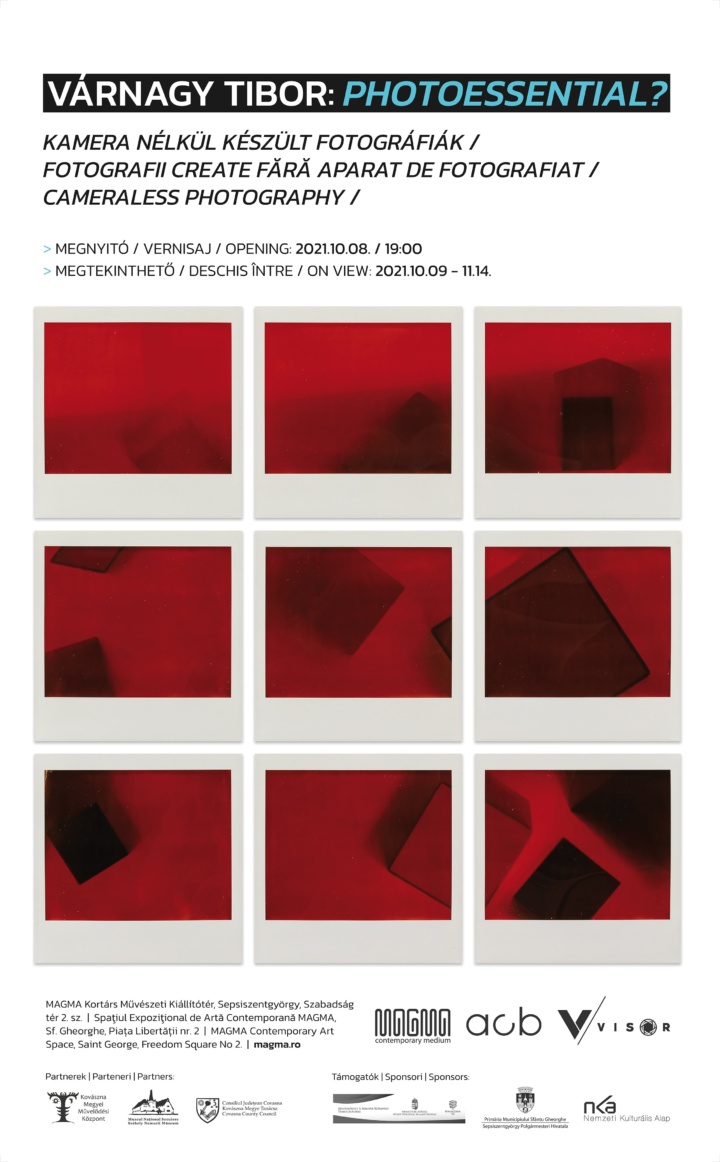 This website uses cookies to improve your experience while you navigate through the website. Out of these, the cookies that are categorized as necessary are stored on your browser as they are essential for the working of basic functionalities of the website. We also use third-party cookies that help us analyze and understand how you use this website. These cookies will be stored in your browser only with your consent. You also have the option to opt-out of these cookies. But opting out of some of these cookies may affect your browsing experience.
Necessary

Advertisement cookies are used to provide visitors with relevant ads and marketing campaigns. These cookies track visitors across websites and collect information to provide customized ads.

Analytical cookies are used to understand how visitors interact with the website. These cookies help provide information on metrics the number of visitors, bounce rate, traffic source, etc.

Other uncategorized cookies are those that are being analyzed and have not been classified into a category as yet.

Performance cookies are used to understand and analyze the key performance indexes of the website which helps in delivering a better user experience for the visitors.