The exhibition project The Photographic_01 is the result of an invitation by artists Mihai Iepure-Górski and Răzvan Anton who are engaged quite commendably in the development of The Paintbrush Factory as an independent and professional institution of contemporary art. They invited well-known Romanian artists and their younger peers to propose exhibitions for the concept of Future Perfect to discuss intergenerational relations and the challenges that the independent artistic scene in Romania faces. My proposition was an exhibition on photography, and I had invited four young artists working in this field to participate: Mălina Moncea, Alexandra Mereuți, Norbert Costin, and Sarah Muscalu.

The concept of the exhibition The Photographic_01 is inspired by the texts of the art critic Rosalind Krauss published in the journal October at the beginning of the 1980s. In her analysis of the medium of photography, she discusses the discursive spaces of photography seen more as a theoretical rather than an aesthetic subject-matter. Starting from these considerations, the exhibition is structured around the themes of representation, the fluid limits of photography in relation to other media and, last but not least, memory. The artistic projects on display employ photography as documentary or as part of multimedia assemblages, or photographic principles are applied to other media, such as drawing or painting.

The project of Alexandra Mereuți, Reflection of Something That You Cannot See, discusses the memory, the traces, and the identity of a place as they relate to the current status of the artist, a person who finds herself “in between places”. Starting from the study of a French city’s photographic archive, she conducts spatially, photogram by photogram, the filmic lecture of the images, while a text that functions as a subtitle holds the key for interpretation. The impersonal pictures of the French archive are in dialogue with a family archive in which people are present and radiating. The conceptual framework and the austere rigour of the work speaks of the fragility and the uncertain condition of the artist in the present time.

Sarah Muscalu discusses the medial condition of contemporary art through the interference of two media, painting and photography. Her project, Factory: A Report on History, depicts a post-socialist industrial space divided into two fragments: one part is painted as we know it presently, while the other part, a video projection of an image, shows it as it used to look like in the past. The visually poor video, a symbol of the perishable past, together with the more durable painting create an overall image of which two parts coexist in different times.

The photographic series of Mălina Moncea falls into the category of contemporary documentary. Although she presents places and situations that relate to the recent communist history, the artist’s choice to capture them at night decontextualizes them, and the formal expressivity prevails over the objectivity of portrayal. The nocturnal backgrounds emphasise the forms that occupy the foreground of the images as well as the contrasts of light and shadow reminiscent of the chiaroscuro painting technique.

The work of Norbert Costin, Shadow of an Invisible Horse, 2010, cardboard aged under a mid-century Parisian needlepoint work, variations of gradient dependent on the colour of the threads, (vanishing work), is a conceptual piece that is born, exists and will eventually disappear because of light. The degrading actions of light on a tapestry leave traces on the cardboard that is behind it and on which the represented image is hence recorded. The title refers to a metaphoric shadow, because light here is viewed not as the phenomenon that allows us to see, perhaps to photograph something, but as the ageing agent of an object. This sophisticated work is presented alongside two photographs, for which light plays a fundamental role in constructing an immersive atmosphere with a unique poetry.

As I was putting together this exhibition, I wondered about the engagement of the artists invited. Although on deeper levels there exist political references in their works, I believe that these fit more into the line of artistic research that analyses artistic media and languages. These pursuits are still not prevalent in Romanian visual arts, and they require an appropriate theoretical and critical context. I truly hope that in the future the Romanian artistic infrastructure will develop in a way to be able to offer a real chance for these artists to continue their projects.

Abstract
We are not as naive as to believe that what we would call the new generation is something that can be in any way anticipated or evaluated by a certain language or in a key that is already academized and therefore dead. What interests us in this context is to draw the boundaries of a battlefield, of a fighting ring, to set the (impossible) framework for a revolution to come. For we are certain that it would do nothing else but end something that has not been yet started, or repeat that which is already well known. The artists we call established do not look for intelligible things or people but rather persevere in placing their finger on something that burns, even if it would do nothing but announce their own demise.

Concretely
Artists like Ciprian Mureșan, Șerban Savu, Matei Bejenaru, Manuel Pelmuș, Mona Vătămanu and Florin Tudor, Monotremu (Laura Borotea and Gabriel Boldiș), Dénes Miklósi and Szilárd Miklós, Ágnes-Evelin Kispál and Attila Kispál are letting themselves be challenged by the curatorial team of the Paintbrush Factory and engaged in an act of working with the stakes and local communities, by selecting artists from younger generations and curating an exhibition featuring their works. 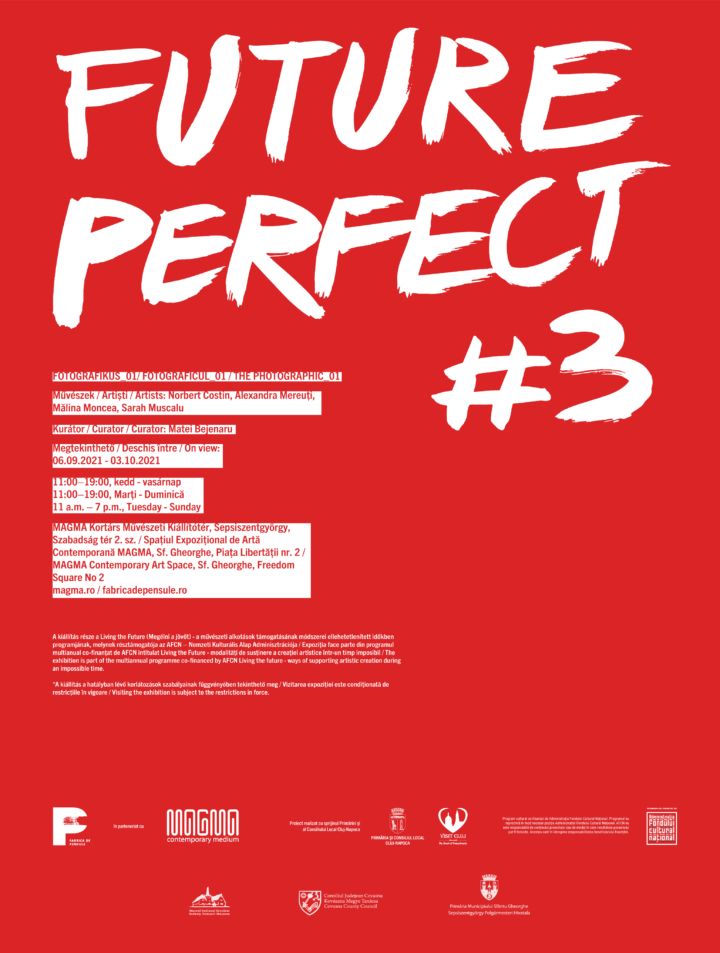 The exhibition was carried out by the Paintbrush Factory Federation alongside the MAGMA Contemporary Medium Association.

The event is part of the Living the future program – ways to support artistic creation in an impossible time.

Cultural program co-financed by the National Cultural Fund Administration. The program does not necessarily represent the position of the National Cultural Fund Administration. AFCN is not responsible for the content of the project or how the project results can be used. These are entirely the responsibility of the beneficiary of the funding.
Project organized with the support of the City Hall and the Local Council of Cluj-Napoca.

This website uses cookies to improve your experience while you navigate through the website. Out of these, the cookies that are categorized as necessary are stored on your browser as they are essential for the working of basic functionalities of the website. We also use third-party cookies that help us analyze and understand how you use this website. These cookies will be stored in your browser only with your consent. You also have the option to opt-out of these cookies. But opting out of some of these cookies may affect your browsing experience.
Necessary

Advertisement cookies are used to provide visitors with relevant ads and marketing campaigns. These cookies track visitors across websites and collect information to provide customized ads.

Analytical cookies are used to understand how visitors interact with the website. These cookies help provide information on metrics the number of visitors, bounce rate, traffic source, etc.

Other uncategorized cookies are those that are being analyzed and have not been classified into a category as yet.

Performance cookies are used to understand and analyze the key performance indexes of the website which helps in delivering a better user experience for the visitors.